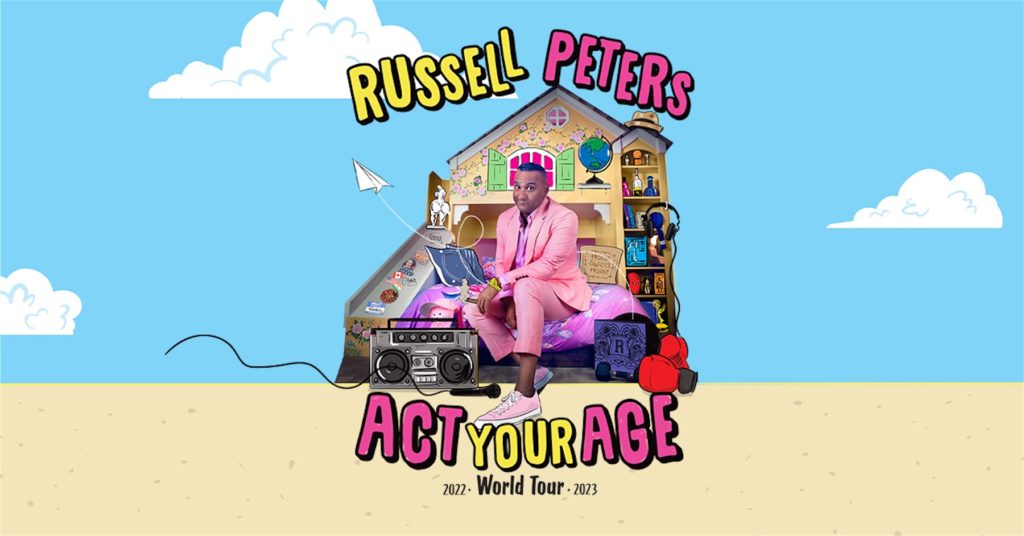 Russell Peters was recently named as one of Rolling Stone’s 50 Best Comics of All Time. He started doing stand-up at the age of nineteen at open mics in his native Toronto, and spent the next fifteen years honing his craft at clubs across Canada and the UK. In 2004, Peters gained critical and global recognition for his CTV “Comedy Now!” special and soon became the first comedian to sell-out Toronto’s Air Canada Centre in 2007. Peters went on to set attendance records at venues from Madison Square Garden to The Sydney Opera House to London’s O2 Arena – where he broke the UK attendance record for highest number of tickets sold for an individual comedy show.

His subsequent tours were captured in his successful specials broadcast on Showtime and Comedy Central: Outsourced in 2006; Red, White and Brown in 2008; and, The Green Card Tour in 2010. In 2013, Peters became the first comedian to create a Netflix Original Comedy Special. Peters’ most recent tour, The Deported World Tour was seen by over 400,000 fans in 40 cities across 20 countries and culminated in the stand-up special, Russell Peters Deported on Amazon Prime in January 2020.

Peters has been awarded Gemini, Peabody, Emmy and Canadian Screen Awards for his hosting, producing and acting talents. His last TV series, The Indian Detective set a Canadian viewership record for Bell Media /CTV in 2017 and was released globally on Netflix.

Peters just launched his own Podcast, ‘Culturally Cancelled with Russell Peters’ on iHeart Media / Cloud 10 and is currently developing a TV series based on his childhood in Canada in the 1980’s as well as executive producing the TV series ‘Late Bloomer’ with YouTube sensation Jus Reign. Peters will also be seen later this year in the feature film, Clifford The Big Red Dog for Paramount Pictures.

Peters resides in Las Vegas and Los Angeles. When not on tour he spends every day with his nine-year-old daughter, Crystianna and newborn son, Russell Santiago. He has a blue belt with three stripes in Jiu Jitsu and is an ardent DJ and hip-hop junkie who tries to get on the turntables for at least a few minutes every day.
Buy TicketsLearn More

Fill out the form below for a chance to receive a pair of free tickets to see Russell Peters LIVE at the Paramount Theatre in Oakland, CA.